Hello I am Noa and I am going to talk to you about Jewish people you didn’t know were Jewish and the reasons why they hide their Jewish Identity.

Did you know one of the world’s most famous magicians was Jewish? That’s right Harry Houdini. Houdini was born in 1874 to Rabbi Mayer Sámuel Weisz And Cecília Steiner, who named him Eric Weisz. Judaism was very important to him, in fact, he bought his tefillin and extra mezuzahs when he was traveling to perform. He also kept a copy of the bible that his father gave to him in his coat when he did his magic tricks. In 1894, after he began practicing as a magician, Eric Weisz changed his name to Harry Houdini because antisemitism was a big problem and he was worried that his jewish name would affect his success. He made this decision after he performed in Germany and experienced many people yelling antisemitic names at him. The time has come to disappear into the next paragraph…

Christopher Columbus lived During the Spanish inquisition where Jews were forced to convert or they would be killed. It was During this time that Columbus, fearful for his life, decided to ‘convert’. (as you say the word uses air quotes).

Another source suggested that Columbus  donated money in his will to Jewish causes. One example he left a large sum to an unidentified man living in the Lisbon Jewish Quarter.

He Saved many other Jews by bringing them from Spain to America. Keeping America in your thoughts moves us straight to another Famous American…

White suits, slick black hair, microphone in hand… and who am I describing…. Why, Elvis of course!

Elvis did not observe Shabbat but he was a jew  according to religious law. Although his mother was Jewish  Elvis’s family attended the  Assembly of God Church and  gospel music became a tradition in Elvis’s family.Elvis’s mother Gladys Presley was buried in the Forest Hills Cemetery in Memphis, carved into her tombstone is a cross and a Star of David. Like Houdini Elvis was worried that being open about his Judaism would affect his success in the entertainment business.  Usually while Elvis performed he wore a gold plated chai pendant, chai is the hebrew word for life. Gee that guy was chai  maintenance.

Even though Jewish people I have talked about in my speech have contributed to the world in many ways, there are  even more Jews who could be on that list. Many people from the past kept their Judaism a secret and even today we do not know that they are Jewish. We should be proud of them and the journey they have been on to get to where they are today, but today there is no reason to hide their….our Jewishness. We live in a time when we can be proud  Jews and contribute to the world around us as so many have before.

My innovation day project was to make a barn elevator.

Once Upon a Time in Noa’s Village , there’s many, many families. Every family was perfect; they had lots of food and lots of water and many many clothes. There were lots of traditions in the village. Everyone loved each other, everyone was friends with each other and everyone was considered family. Everyone loved it there  in Noa’s Village except for one girl her name was Olivia she was wild and adventurous. and was a bit of a tomboy. She did not like the traditions of the village. She thought everyone should be allowed to decide what they do.

“I want to skip Four Seasons Day this year is that okay ” Her mother was Furious. She  said,

“here we celebrate all of the holidays you are part of a family and you will celebrate all of them ” Olivia was so mad so she went to her best friend Noa. She told her about the holidays and how she didn’t want to celebrate them cuz she thought they were silly. Noa was always so supportive. Noah said I don’t understand why you Wouldn’t want to celebrate the holidays but that’s okay. Noah told Olivia all about her family heirloom it was a map showing giant rock monster  all the way across the world one taker 18 years to  get to the Giant.

Olivia tried to sneak out at night but she made too much noise and couldn’t get over the special fence. their Village was surrounded with a metal fence that was 8 ft tall. Olivia tried to climb the fence obviously didn’t work .

The new  plan worked! Olivia Found out she needs to dig a hole because that is the only way to get out of the Village.Olivia had planned out the whole thing she was packed and packed with clothes and food she had extra sleeping bags and a lot of money I knew this would be a very long trip 18 year  ( I am exaggerating).  Olivia was ready to work long hard and she knew it would be a very long time till she got to the Rock Giant. Olivia was on her way

We studied light during that we learned about Reflection, Refraction, Translucent, Transparent, Opaque,  , Artificial light, and Natural light. I learned so much.

We did lots of experiments like refraction with a cup and fake money I liked the coins looked different in the water.

Here are 3 facts I learnt in class about….Refraction

In class, we did an experiment to investigate this topic. The experiment was called….. The ray of light experiment

Now I will explain what we did: 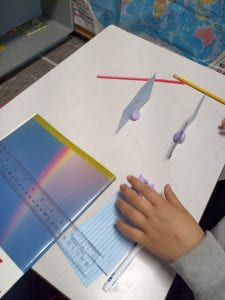 First, we put holes in 4 in index card but on the last one, we put a target. Then we stuck a straw throw it we turned the lights off and put a flashlight in the straw the light hit the target. This showed how light travels.

Here is a video of me doing another experiment about reflection

We are starting a sound blog next.

Have you ever wondered whether other people have been in quarantine like us?

Hi, my speech is about quarantine!

Quarantine comes from the word quarnante or the Italian word cuarenta journo which means 40 days.

In the 14th century

When ships came from cities with virus And they wanted to stop in Venice the police would make them stay in the boat for 40 days before they were allowed to come off the boat.

They did this so that anyone on the boat who had the virus from the Previous city would not give the virus to anyone in Venice.

After 40 days the virus would have died off the ship

Quarantine in the bible

Another interesting fact I learned is that even the Bible talks about quarantine.

When the Jews were leaving Egypt to go to Israel, God told Moses that everyone with Leprosy had to be treated carefully and distanced from everyone else.

He said their “clothes shall be rent, their heads shall be left bare, they shall cover their upper lips, and call out “Unclean unclean”. They must also sleep outside of camp”.

Other than shaving our heads which we aren’t doing, these are all of the same; things that we are doing today to fight Coronavirus.

My life in quarantine. I mostly just do school I basically just sit in my room and do so so much school. I don’t get to see my family much because we’re always doing  Arun Singh. we always FaceTime are relatives and once in a while we go and see my zaityat Hillel  Lodge. Sometimes I go on a distance walk with my friend or I’ll go on walks by myself I’ve walked an hour and a half.

Sometimes I just walk half an hour but I have lots of fun doing it and it’s good exercise.

Something that’s also cute is in that the Disney movie Rapunzel Rapunzel is quarantined in her house for 18 years also her kingdom is called Corona!